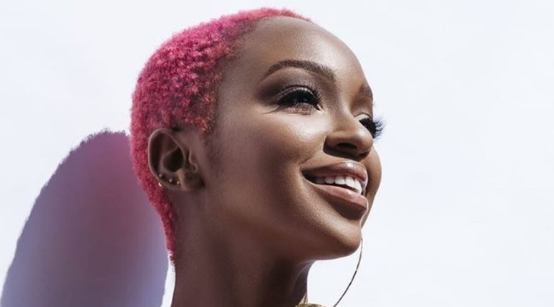 Nandi Madida has once again proven that she is the girl she thinks she is after receiving yet another gift from ‘best pal’ Beyoncé Knowles. The Organic hitmaker has shared a snippet of her flaunting one of Beyoncé’s items from her ‘Icy Park x Adidas’ chocolate range. The range is an addition to her Ivy Park clothing collection.

The Black Is King star took to Instagram to show off her latest addition to her closet and it was a gift from the global superstar herself. As per her tradition, Beyoncé sends packages of clothes as gifts to prominent celebrities and this year Nandi Madida was on her list. She did not reveal how many items she got but on her video she wore a chocolate-caramel, leather bodysuit, accessorized with a black and white printed fur over her shoulder.

After Nandi impressed many when she played the character of Nala on Beyoncé’s ‘Black Is King’ film, she proved to have impressed the star as well. Earlier this year, Nandi also received a gift from Beyoncé in partnership with Parkwood. Coupled with the gift was a sweet note from the star saying she is grateful for her.

“Thank you for your beautiful contribution to Black is King. I’m grateful for you Love” reads the card followed by Beyoncé’s signature.

Nandi was grateful as well for the gift,

“Thank you Beyoncé and the Parkwood team for the beautiful gift, forever grateful and humbled to have been part of such a great project, and working with inspiring people. Ngiyabonga.”