Woman Finds Husband Cheating With Side Chick, Proceeds To Make Both Breakfast

A woman’s tale of her husband cheating ways has gone viral on Twitter.

The lady, going by the name Naledi Maleeme, shared a story of the day she found her then husband cheating inside their own home.

The two have since divorced, but the story is as disturbing as it is interesting. It shows the level of restraint some people have when it comes to dealing with infidelity.

As she narrated it, they both attended a wedding ceremony, but Naledi ended up returning to their house early. She explained that her reason for returning early was because she was not in the mood to party till late, plus she also has kids.

Read: Zodwa Wabantu Reveals Why She Called Off Wedding

Her husband didn’t have similar obligations and instead went out partying.

Upon returning home, the husband brought with him a woman who was also at the wedding.

Having arrived home early, Naledi was also first to wake up the following day at around 6am. What she found in the lounge was quite shocking.

”My EX husband, slept with a women from a wedding we both attended I came back early from the wedding,he brought her to our house had sex with her I woke up to find her underwear,his shoes, his belt, her earrings in the lounge she was sleeping in the guest room,” she narrated.

My EX husband, slept with a women from a wedding we both attended I came back early from the wedding,he brought her to our house had sex with her I woke up to find her underwear,his shoes ,his belt,her earrings in the lounge she was sleeping in the guest room. https://t.co/7r0GSV0XTV

It appeared her husband and the side chick had shamelessly done their business in the lounge, before proceeding to bed hoping no one would find out about it. But they forgot to wipe out the evidence.

Naledi did not make a scene, but proceeded to make breakfast for everyone including the side chick, who woke up nearly 5 hours later at 11am.

Not only that, but she also offered to drive her home. Needless to say, that marriage did not last long after that.

Read the full thread below. 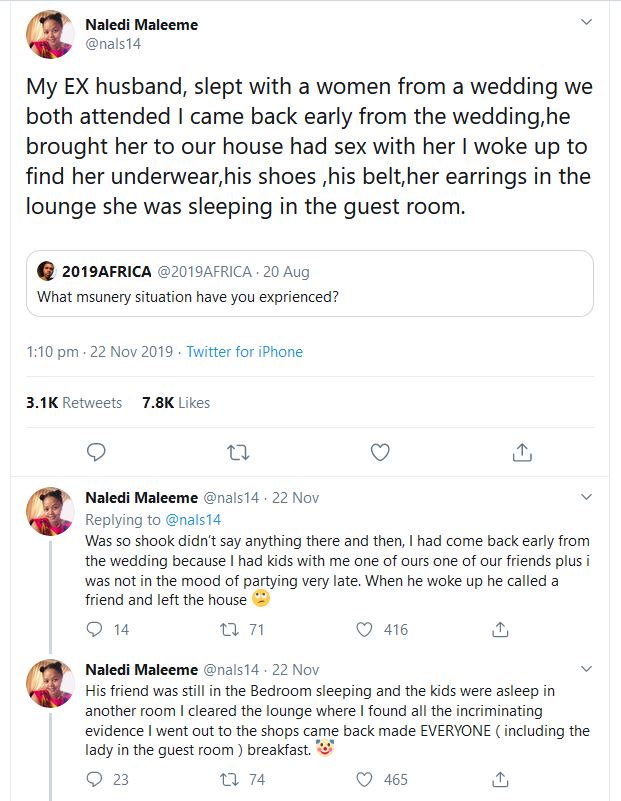 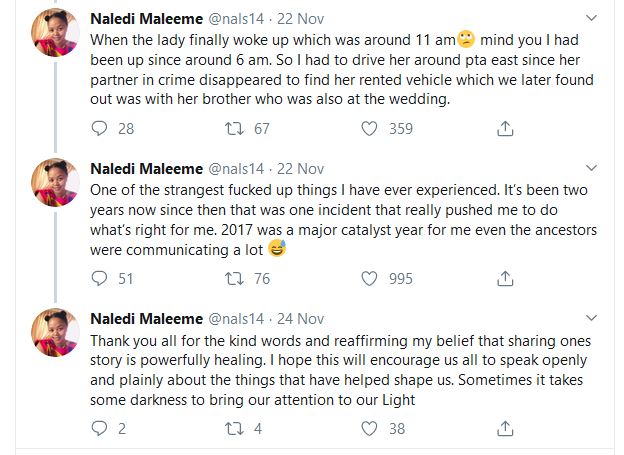 As expected, Mzansi was shocked. Here are some of the comments that followed.

”I’m sorry ….karma will get him sevenfold”

”I’ve never pay attention to these threads but yhooo I kept reading your story and I must say you are very wise. God Bless you sisi”

”Some stories here sound like a Tyler Perry movie. Some guys crazy out there.”

”Your level of understanding is amazing. People would have died that day kise”

”Eish sorry you won’t find a perfect man but atleast you will find the one who will respect you. We all cheat but in a respective manner. You deserve better.”