Prince Harry’s Baby Archie Given Xhosa Name ‘Ntsika’.. This is What it Means 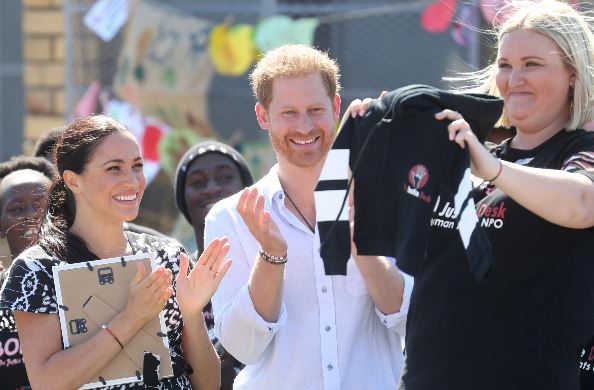 The Duke and Duchess of Sussex arrived in South Africa on Monday for the first leg of their African tour.

The royal couple brought with them their baby Archie for the 10-day trip. On Wednesday however, Prince Harry will travel alone onward to Botswana, Malawi and Angola.

The couple touched down in Cape Town, with their first official appearance being a visit to Justice Desk NGO on Monday afternoon at Nyanga, a township in Cape Town South Africa.

Here they interacted with the public and leadership of the organization, before being presented with a black hoodie with the words, “BE A VOICE FOR JUSTICE” printed on it.

A certificate was also presented to baby Archie by a member of the Nyanga community, bestowing upon him a a traditional Xhosa name.

“So we’ve given him the traditional South African name Ntsika,” the charity head said.

The name is pronounced as ‘Nt-si-ka’, and it means pillar of strength.

“May he always be a pillar of strength for those who need him,” added the charity head.

Legal Aid in South Africa.. Everything You Need To Know < Previous
PHOTOS of Prince Harry and Meghan at District Six Next >
Recommended stories you may like: