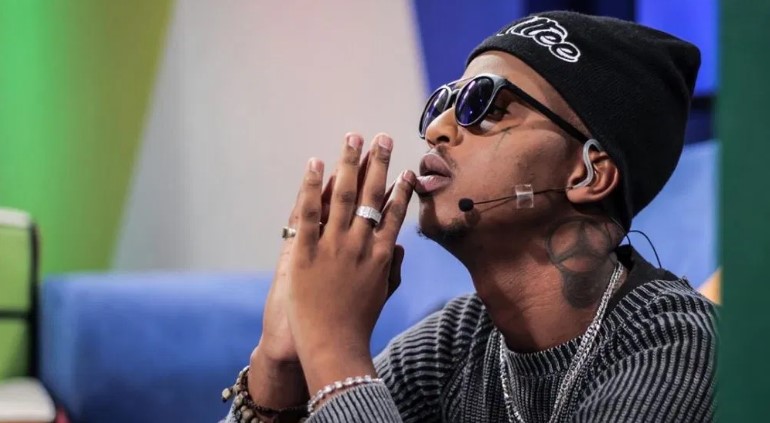 A photo has surfaced showing Rapper Emtee posing in front of a stunning mansion and has many people thinking it is his. The mansion’s price value is speculated to cost around R4.5 million. Soon after the picture went viral, many started to congratulate the rapper for dusting himself off but he claimed it is not his.

Emtee bought 4.5 million house ,The guy is a true hustler but the media will always tell you the bad side of him 🚮 pic.twitter.com/pF11qPJnxd

It is no secret that the rapper’s early career was funded by his former record label Ambitiouz Entertainment. So when they parted ways, he was left with the responsibilities of paying the monthly rent as well as pay for the cars as well. He quickly lost all of those, claiming that Ambitiouz had given them to duo Blaq Diamond.

Ambitiouz had previously distanced themselves from claims that they are the ones behind the repossession of Emtee’s house and cars. It was alleged that Emtee had those items repossessed because he failed to pay rent and he caused them damage. In his response he decided to take the opportunity to diss the boys,

“Lol they living in my old apartment, driving my old car and guess what … their proud. I got more money than them combined and their topping charts which we all know the my won’t get a cent for. Stop playing wimme! I’m tired of talking about irrelevant people and cults.”

Studio was fun today. The executive producer Avery and the main man Logan were in in the building making sure everything goes well. pic.twitter.com/BbkV3yCsgH

When many speculated that this is his new home, he quickly laid those rumours to rest by saying it is not his. A fan wrote, “Emtee bought 4.5 million house. The guy is a true hustler but the media will always tell you the bad side of him.” Emtee responded by saying, “nah” he does not own the mansion.